Join our Telegram community for political discussions in real time with Kumekucha Chris. Click on the link below;

Some cold cases (unsolved murders) have a way of almost resolving themselves with the benefit of hindsight. Hindsight is like a bird’s eye view. By looking at the whole picture or getting a bird’s eye view of the situation one is able to put the pieces of the jigsaw puzzle together much more easily. 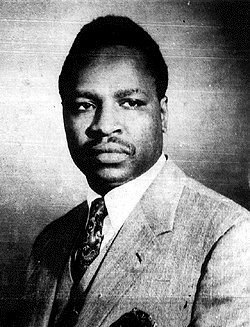 JM Kariuki was the only Kikuyu politician to set foot on Rusinga Island for Tom Mboya's funeral. Later he was to be brutually murdered after terrible torture. It is believed that he was tortured at the then notorious Kingsway House by security agents. What information were they seeking from him?

For a long time now, I have carefully studied all the evidence linked to the Mboya murder. The JM and Ouko case were a little too obvious and to date these are virtually solved cases, the only problem is that the perpetrators have not been brought to book.

The recent Standard newspapers raid, the Ouko murder, the brutal JM killing and the Mboya assassination all have one thing in common. All were matters of internal security or security of the state and were handled as such. When you understand this simple fact all the pieces of the jigsaw puzzle fall very neatly into place.

I have just been studying details of all four cases once again and they all bear uncanny resemblance. Before we go into that it may be a good idea to define national security (state security, internal security, they all mean the same thing).

Here is what the online encyclopedia Wikipedia has to say;

National security refers to the public policy of maintaining the integrity and survival of the nation-state through the use of economic, military and political power and the exercise of diplomacy, in times of peace and war.
Measures taken to ensure national security include:
• using diplomacy to rally allies and isolate threats
• maintaining effective armed forces
• using intelligence services to detect and defeat or avoid threats and espionage, and to protect classified information

I want you to take careful note of the third point mentioned. “To defeat and avoid threats.” “To protect classified information.” All three assassinated Kenyans were seen as threats. Threats to the presidency and therefore threats to national security (more on that later).

Ouko was murdered after a controversial trip to the United States where it is rumoured that he had easier access to the then US President George Bush Senior than did President Moi. That was a threat to National security.

JM Kariuki was never the same person after the death of his close friend Tom Mboya. In fact it is on record that JM was the only Kikuyu politician at that time who set foot on Rusinga Island for Mboya’s burial. JM started talking about not wanting a Kenya where there were 10 millioniares and 10 million beggars. It is believed that he was referring to the persons close to the then Ptresident Kenyatta who were using their position to amass colossal amounts of wealth through corruption. JM had been Kenyatta’s private secretary and must have witnessed first hand the way the president was accumulating land for himself like there was no tomorrow. It is said that JM could even turn up at harambee meetings being presided over by the president and donate more money than the president. Remember the threat to the internal security of King Saul in Biblical times when the women sung that shepherd boy David was killing tens of thousands but King Saul was killing only thousands? And to think it was only a song.

The implication here was that JM was trying to prove in public that he was better than the president. The guys he was dealing with had already felled a Mugumo tree called Tom Mboya and had no qualms doing the same with JM and this time, they tortured him first. Even cutting out his private parts. Thanks to a reader of this blog, we now know that the same building where Mboya’s murder was planned and finalized is the same building where JM was taken in and tortured for hours on end.

What information were the security guys looking for by tortusing JM? A good guess is that they wanted to know what foreign support he had.

As we have said before in this blog, Tom Mboya had been in line for the presidency when Jomo Kenyatta was out of the picture and still in detenrion. Mboya’s greatest undoing and the reason why he was viewed as such a huge threat to internal security was the fact that he was very friendly with the Americans. In fact he had direct access to American Presidents like John F. Kennedy and President Johnson, who took over after Kennedy was assassinated. For some unexplained reason, Mboya never really hit it off with Richard "Watergate" Nixon, and must have turned in his grave when the Watergate scandal broke and brought down Nixon’s presidency. The Americans had just organized "something" in Zaire where charismatic Patrice Lumumba had brutally been removed from the picture and replaced by their darling, Mobuto Sese Seko. The Americans could easily organize the same in Kenya. After all they did not like the dominance of the British (who were very close to the Kenyatta government.)

Were the British consulted on this one? It is very likely that they were. Mboya as I have said was a Mugumo tree and the government may have wanted reassurances that incase of any serious backlash, they could count on the support of the British. Here it is interesting to note that during Mboya’s funeral President Kenyatta was visibly so shaken (there was rioting going on outside, that was ho popular Mboya was) that he was unable to read the eulogy. It was done for him by a cabinet minister and MP from Nyanza, Mr Ayodo.

Now the big revelation here is the Standard raid. Here we have the advantage that a cabinet minister admitted in public that it was a matter of national security. Going by what has happened in the past, chances are very high that whatever it is the Standard newspapers were about to publish touched on (you guessed it) the Presidency. Now your guess is as good as mine as to what the big issue was about exactly. Anglo-leasing? The Arturs? Who knows.

You will have noticed that internal security seems to mean the same thing as presidential security. In young states in Africa, it does. If you doubt it, look at what happened in Somalia. Everybody cheered when strongman Siad Barre was overthrown, but look what followed - chaos. To date order has not been restored and there has been no peace.

I would like to thank one of my readers who has been making comments here, who forced me to think more deeply and thus put everything together in this way.

I still believe that the best way to heal all this wounds is to have a truth and reconciliation commission and have these issues and accompanying evidence tabled. This is another reason why a new constitution with proper separation of powers is so important.

This has been very exhausting for me but I feel a lot more enlightened today.

I hope to continue with this depressing topic of state security and espionage in a later post soon.

Ben Gethi Was Very Powerful
Posted by Chris at 3:58 AM

I concur Chris. In the Kenyan context state security means that a direct threat to the presidency (and not institutions) is a direct threat to the State. The concept is legitimate but the determination is often abused. If we continue our retrospection we realise that enforcing this state security requires adept and ruthless people. Every spear has its tip. Ben Gethi a.k.a Uncle Ben was at the top of the pyramid. I think Raila's mention of this man was not accidental. He was Israeli trained, GSU baked and hard-knuckled. His reputation preceded him. How about a post on this man Chris, minefields withstanding?

You are absolutely right. It is a shame on what is going on in Kenya and the rest of Africa.
There will be a revolution or uprising against the old leaders and abuse of power.
Due to tribalism and lack of unity things will only get worse.
The murders of JM,Mboya, Ouko and Owiti are a tragic blow to the future of Kenya.
I would like to make a difference in Kenya, but have to choose between life and death.
As the media and the internet grows the truth will be exposed.
Keep up the good work.

i like your drift and would probably begin my own search coz i think we need more connecting facts to make our assumptions conclusive in themselves. keep up the good job, this is stuff everyone should be aware of and seeing as most of us have political amnesia, we need such channels to remind us of the sins not only of the past but current that our leadership aspirants are involved in.

Ouko was killed by the administration at the time because it was apparent he was favored by the white house.
Mboya and JM were also killed for fear of them becoming popular. Remeber politics is a not a fair game. You have to play dirty if you want to stay in the game and win.

This is what the young generation needs to learn about. So that one day when the fresh leaders like me and you will have brought true change int o effect, we will look back and see the great milestones we have covered thanks Chris for putting everything to the limelight. Now tell us more about Ben Gethi.

its great to know that a good number of us still care about our country and the forgoten heros who never got acknowledgement after their hard work. i was watching national documentary the other day, a program called the Long Way Down. those gentlemen passed Rwanda and u couldnt wished for a more humble president. he met them and not hyped and a million security men but with his local country men. even showed them his cows. does Kibaki know the way to the kitchen let alone our failing hosipitals? what are they good for? him and Raila. God have mercy on us becouse we need help, not wealth

I like the analysis here and the way you are point blank with facts. I very much like how you put two and two together and arrive at an observation.

One thing I noted is that in Africa the definition of national security is different. It is used by the heads to protect their own interests. How convienient for them? How can we lose so many brains -meant for use in the same state- because of "national security" reasons? What a shame?

Reconciliation is important but truth must prevail for true reconciliation. Biblically, forgiveness follows confessions and genuine confession at that. Circumstances will change but what is true remains thus.

...Please keep up the work

This is absolutely correct, its true that we need to establish a truth justice and reconciliation commission, a commission that resides on transparency and integrity. We have to by all means bring the greedy wolves to light and let the able constitution play its role... Indeed this is when everyone has to dance to the tune, and no stone must be left unturned.
{Please help me know something about the 1982 coup attempt in Kenya.}

am greatful for this knowledge that has enlightened me abt the undercurrent events that have transpired in this great nation..i am pertubed by the bitter fact that we are still drowning in such immense injustices..kip up the gud work and God bless you.am greatful!!.

Get in touch with the editor; umissedthis at geemail dot com.