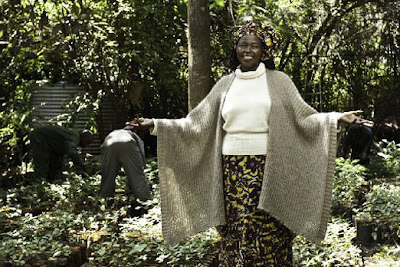 She came. She battled. She won. She was a first is almost everything she put her head and heart into. The first woman in East and Central Africa to earn a doctorate degree. The first African woman to win the coveted Nobel peace prize in 2004 for her conservation efforts. And now a bright light has been dimmed. The cruel hands of death have snatched Prof Wangari Maathai from our midst. Shame!!

Forget the present-day activists shouting about the NOT-MORE-THAN-TWO-THIRDS provision in the new constitution, Wanagari Maathi was there more than three decades ago and grabbed the whole 100% then. She lived ahead on her time and was a trailblazer leading by example and from infront.

The death of this distinguished lady marks the end of an era epitomized by Wangari's love for nature/trees and environment but above all else her relentless fight for social justice and freedom. Death, how cruel is thee? But we will shame you by choosing to celebrate the productive life of Prof Wangari Muta Maathai, an icon who lived well ahead of her time. 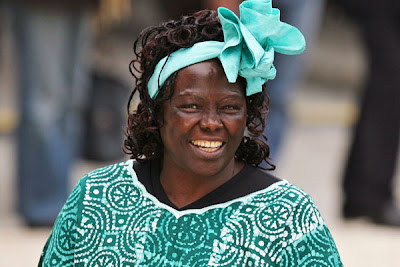 Death has been variously described as the universal equalizer. Maybe but you cannot fail to feel a sense unfairness when it strikes and eliminates those who stand tall for the downtrodden and depressed. Wangari stood up against Moi's oppressive regime and won when the kleptocrat schemed to desecrate Uhuru Park with another concrete monster in the name of Kenya Times Towers.

She defied all African stereotypes by being a first in many spheres including divorce from her husband when it was unfathomable. She may have not stripped naked herself but productive symbolism of leading mothers of political prisoners remains unmatched. One Koigi Wamwere must be feeling a great loss in the passing on former Tetu MP.

She may be gone having succumbed to cancer but Kenya and Kenyans owe her plenty. Our best and fitting tribute to this heroine and lioness would be to remain steadfast against tyranny and aspire to fight for the wider good for our motherland.

Why Do All Opinion Polls Show That Ruto Will Win? (How Did It Happen?)
3 Things To Do To Escape The Clutches Of Witchcraft Spells | Witchcraft Escape
Maid Cooks Ugali for Employer With Her Urine | House Help From Hell
The Shocking Kamiti Prison Escape Drama Classified Inside Story
Maraga vs Ahmednassir Fireworks
Get in touch with the editor; umissedthis at geemail dot com.